Our native Dark bee has quite an adventurous history. Descendants from Central Asian ancestors became dominant across northern Europe. Below you will learn all about it.

Once upon a time

About 6 million years ago the ancestors of honey bees migrated in two separate groups from Central Asia (see Figure 1). One subgroup headed   southeast evolving into Apis cerana, the Eastern Honey bee. The other subgroup migrated to the west and overtime became Apis mellifera, the Western Honey bee. (Wallberg et al., 2014) We will now focus on the development of Apis mellifera, our native honey bee. During its colonization of the west, the honey bee population regularly split into further groups so that a number of evolutionary lineages can be identified within Apis mellifera: lineage M which took a northern route through Europe then down through present day France into the Iberian peninsular; lineage C colonized southern Europe; lineage A went to Africa and finally lineage O travelled into Asia Minor and the Middle East1. These evolutionary lineages can be distinguished from each other by looking at the mitochondrial DNA (mtDNA)2 of honey bees. Figure 2 gives a view on the natural geographic distribution of these four lineages, including the various subspecies that ultimately arose through natural selection and evolution within those lineages3.

Figure 1: Representation of how 2 main migration flows have developed from a common ancestor population in Central Asia (yellow star): 1 towards the southeast of Asia (red), Apis cerana, and 1 towards the west (black), Apis mellifera (Jeroen Heremans, edited by Dylan Elen) 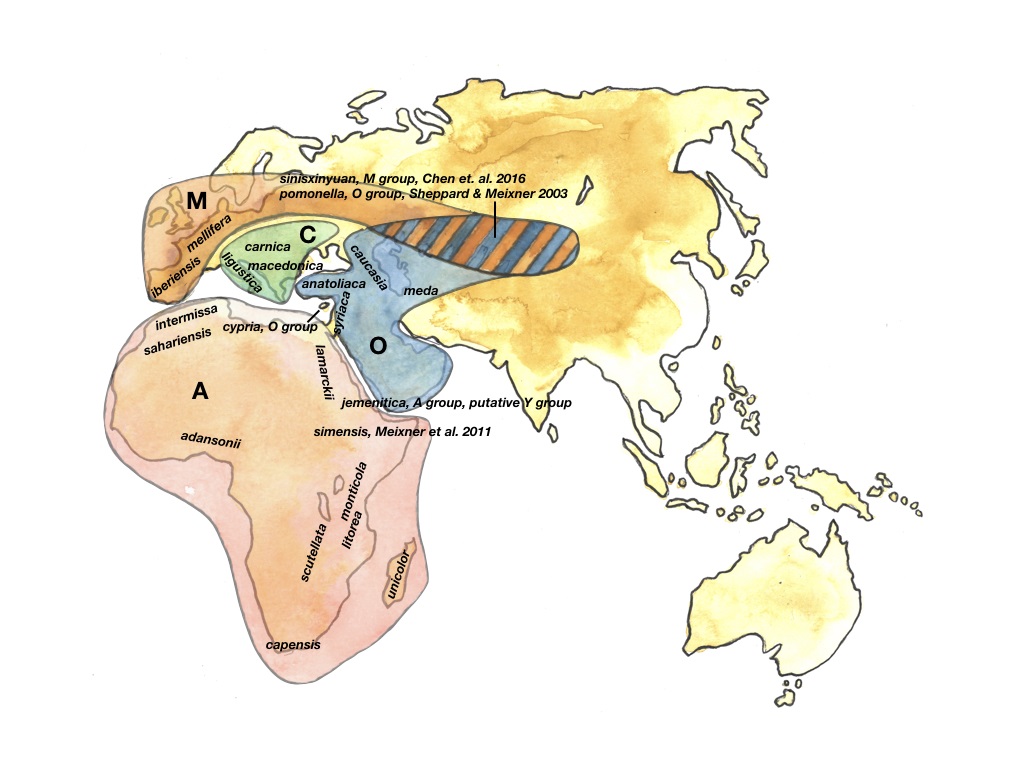 Figure 2: Representation of the geographical distribution of the evolutionary lineages within the Western honeybee, Apis mellifera (Keith Delaplane)

1 Within the scientific community there is a discussion about whether or not to recognize a fifth lineage, Y, on the Arabian Peninsula.

2 Animal cells possess mitochondria, the “energy factories of the cell”, which have their own DNA and are always inherited from the mother. Based on the differences in the COI-COII region of this DNA, the different evolutionary lineages can be distinguished.

3 Speciation, the biological concept behind the origin of species, will be explained in a following article.

Migration driven by climate and topography

Changes in climate during and between successive ice ages caused lineage M4 honey bees to repeatedly migrate back and forth from an area in Northern Europe (extending from France to Scandinavia) down into southern Europe to the French Languedoc, Provence and the Iberian Peninsula. During the last ice age (Weichselian: 116,000 to 11,700 years ago), lineage M honey bees were only to be found in northeastern Spain, between the Pyrenees and the Iberian Mountains (see Figure 3). From the transition to the Holocene (11 700 years ago) onwards the climate in northern Europe slowly warmed up allowing the growth of plants attractive to pollinators permitting part of lineage M honey bees to again migrate northwards where it has evolved into the subspecies Apis mellifera mellifera, or the Dark bee. Lineage M honey bees that had remained between the Pyrenees and Iberian mountains spread throughout the Iberian Peninsula and evolved into the subspecies Apis mellifera iberiensis, or the Iberian bee. (Miguel et al., 2007) Honey bees of lineage C: Apis mellifera ligustica, the Italian bee and Apis mellifera carnica, the Carniolan bee (see figure 3) could not migrate northwards because they were trapped behind natural barriers such as the Alps and Carpathian mountain ranges, or were not adapted to surviving in more northern climates. 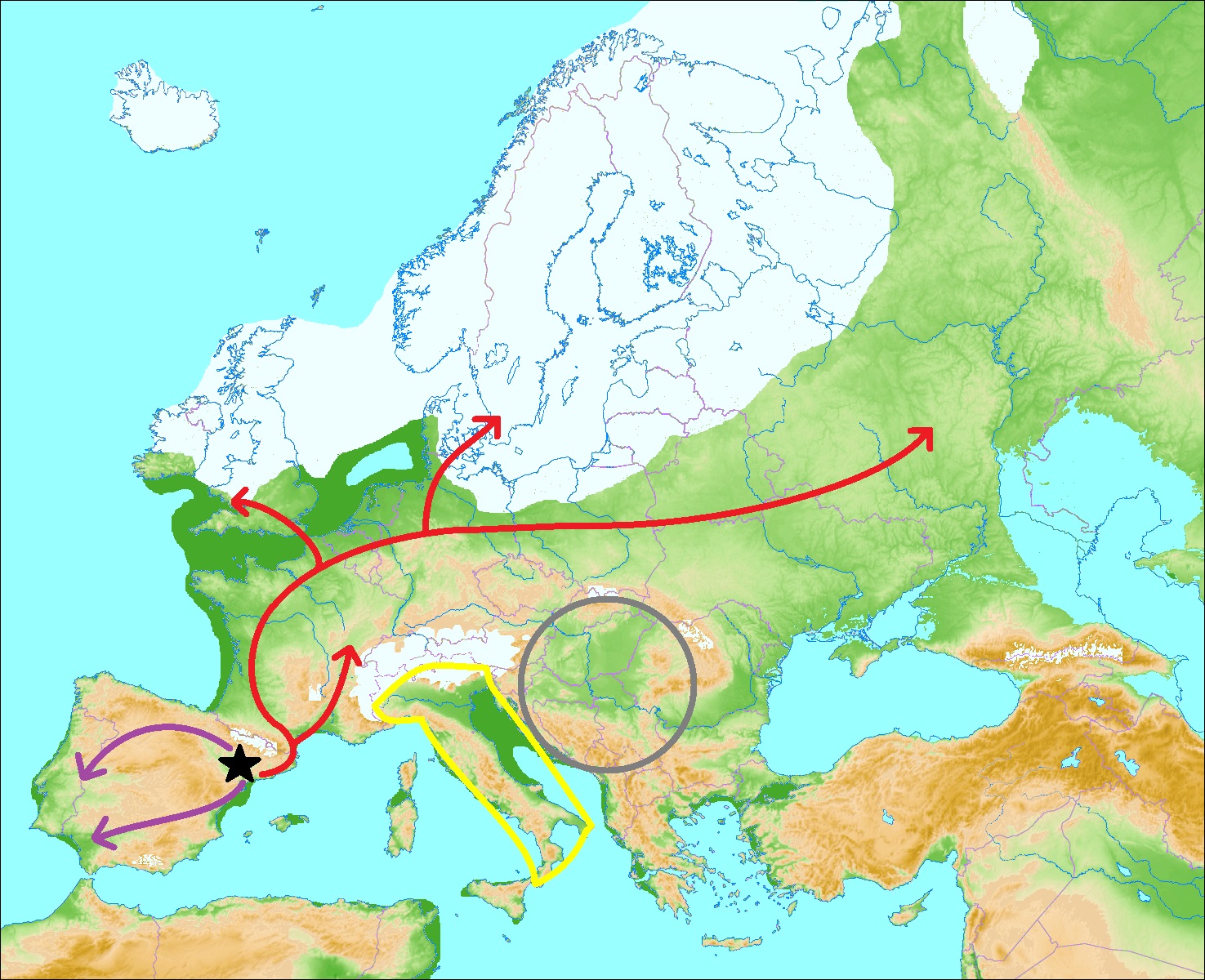 It should be noted that the northward migration of the tiny insect, which would eventually become our Dark bee, happened simultaneously with the northward migration of lime (Tilia sp.) and oak (Quercus sp.) trees. Honey bees could only expand their territory where sturdy trees grew in which cavities formed by woodpeckers and other organisms provided space for their nests, see Figure 4 (read also Nest space). (Ruttner, Millner & Dews, 1990) The area the Dark bee would eventually acquire as its habitat extends from southern France to Scandinavia and from the British Isles to the west side of the Ural Mountains. It is the only honey bee native to this area (see also Figure 5). 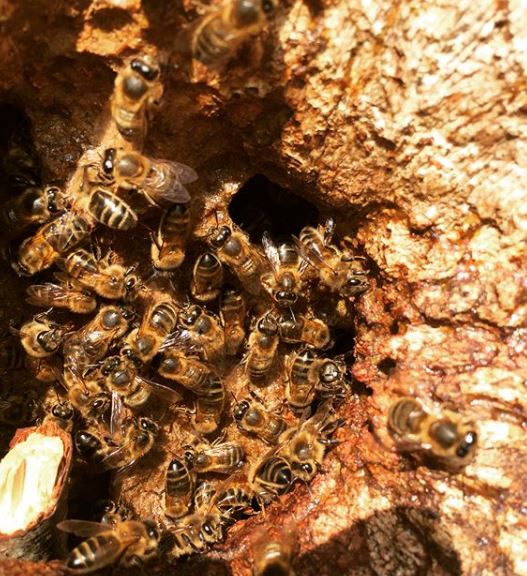 Figure 4: A colony of Dark bees living in the wild in Wales, the flight entrance of the nest is strongly guarded (Dylan Elen)

4 There is also a Central Asian subspecies of lineage M: Apis mellifera sinisxinyuan.

Biodiversity of the Western honeybee in Europe

The map below (Figure 5) shows the natural distribution of the habitats of the different European subspecies as they slowly developed naturally after the end of the Weichselian glacial period. Finally, Figure 6 below shows photographs of worker bees from each subspecies. Photograph no. 10, the Cretan honey bee (Apis mellifera adami), is from a museum collection because from the end of the 1990s this subspecies has been considered extinct due to ‘genetic pollution’. (Hazanis & Bouga, 2003) For the same reason other subspecies are struggling to survive, including our Dark bee. You can read more about this in the topic downfall. 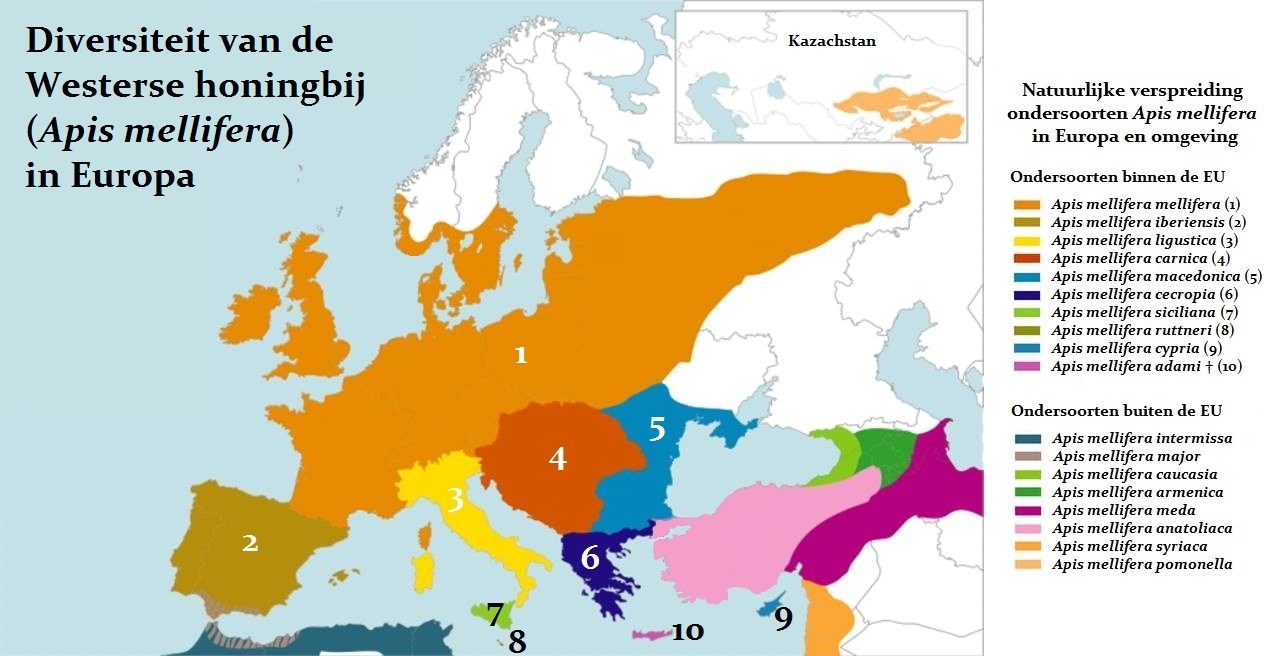 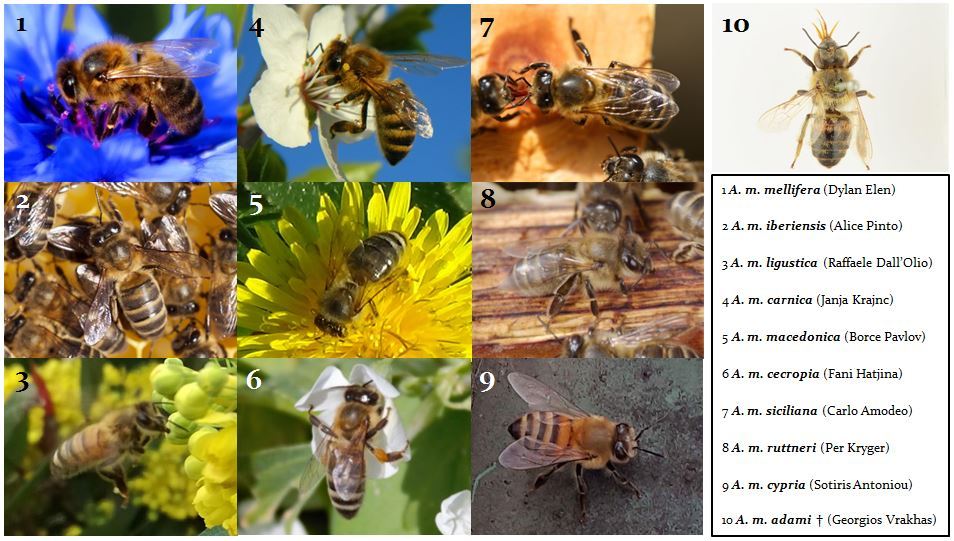 Figure 6: Workers of the different European subspecies of the Western honey bee (Apis mellifera), figures correspond to those used for the habitats in Figure 5. (Dylan Elen)

In addition to Apis cerana and Apis mellifera there are of course other species of honey bees: A. dorsata, A. florea, A. andreniformis, A. koschevnikovi and A. nigrocincta. They have been omitted to simplify the explanation but would have evolved from the same group of primeval honeybees as A. cerana and A. mellifera or from a more direct ancestor of A. cerana.