The downfall of our native Dark bee has not happened overnight. Instead it started in a small way during the 19th century and grew gradually in the last century. Below you can read more about it, step by step. Author: Dylan Elen (translation assistance: Ron Cheesman)

To understand why the Dark bee is so rare it is important to have a look at what happened in the past. After all, the start of its demise took place in the mid-19th century. In 1847 Johannes Dzierzon began promoting gentle and strong honey bees from southern Europe in German-speaking Europe. Calmness as well as a low swarm tendency had become important characteristics for honey bees due to the switch from skeps to hives with replaceable frames. Dark bees had been selected for the opposite characteristics by skep-beekeepers. (Elshout, 2006) Dzierzon mainly promoted Italian bees (Apis mellifera ligustica) with which he built up a lot of experience. As a result, many Ligustica colonies from Italy, but also Carniolan colonies (Apis mellifera carnica) from Austria and Slovenia (both at that time part of the Austro-Hungarian Empire) were imported into the then German Empire. The effect of these imports on German beekeeping was negative because hybridization with the native Dark bee caused increased aggressiveness and a tendency to swarm after a few generations. Beekeepers finally changed their minds wanting to switch back to their own Dark bee, breeding favourable properties for beekeeping. However, that never happened because in the late 1920s a new wave of imports of Carniolan queens started. (Bienefeld, 2016)

This time Carniolan queens from a few Austrian beekeepers (Hans Peschetz and Guido Sklena), who had specialised in selective breeding, became increasingly popular. Unlike the Slovenian Carniolans, they were bred mainly for low levels of swarm tension and thousands of queens were sent from Austria to Germany. However, it was not until 1937 that breeding activities were officially performed in Germany. Until then only the native Dark bee was allowed by the German government, importing Carniolan bees was therefore banned. That changed in 1938 due to the Anschluss, soon the already well bred Carniolan bee was chosen over the Dark bee by beekeepers. (Friedrich & Fehling, 2000a) The Carniolan bee was even recognized as “Die Reichsbiene” (meaning “bee of the empire”) by Gottfried Goetze, an important member of the NSDAP and leader of the bee institutes in Bonn and Mayen. (Imkerpedia, 2011) Until the 1950s, Prof. Dr. Enoch Zander carried out a limited breeding programme for Dark bees in Germany but Carniolan bees proved too popular. (Friedrich & Fehling, 2000b) The bee institutes that had not switched to Carniolan bees during the Second World War also started using Carniolans after the war. (Elshout, 2006) 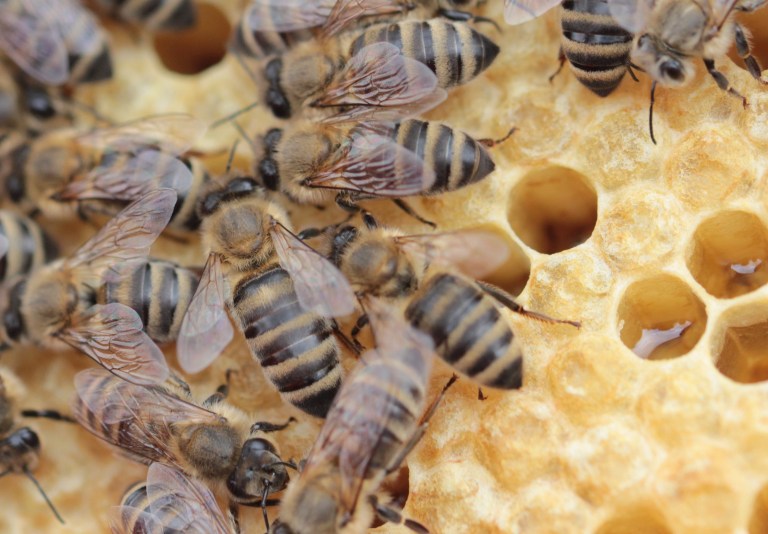 It is thought that the first time foreign honey bees were imported into the Netherlands was in the 1920s and they were Caucasian honey bees (Apis mellifera caucasica) strongly promoted by a certain Mr. Roman from Bilthoven. However, their success did not last long and in the 1930s many Dutch beekeepers decided to test the Italian honey bee after hearing good reports from the USA about this subspecies. However, their winter hardiness disappointed Dutch beekeepers. After the Second World War it was the turn of the Carniolan bees and quite soon after the first imports of this subspecies a mating station was set up on the Wadden island of Schiermonnikoog under the coordination of a certain Mr. Geskes. With the arrival of the Varroa mite and the departure of Mr. Geskes, interest in Carnolian bees stagnated and even declined (Speelziek, 2004). Nowadays, 33% of Dutch beekeepers keep Carniolan bees; 24% keeps Buckfast bees; 5% keeps Dark bees; 16% keeps several types of honey bees and about 20% keeps mongrel bees according to a voluntary survey (2020). Things turned out differently in Flanders. In the 40s – 50s, large numbers of Ligustica queens were imported from Italy resulting in aggressive bees. just like in Germany a few decades earlier problems emerged with F2 hybrids with local Dark bees. (Laurent Ignoul, chairman of IFANG, pers. com. 2017) The Dark bee became completely hybridized and the Italian bee turned out not to be ideal so that beekeepers continued with their hybrids which were also called “ginger bees”. That did not change until the 1970s. On November 30, 1974, the Flemish selective breeding group decided to import already strongly bred Carniolan bees from West-Germany and to spread their genetics across Flanders via a grafting project to allow beekeepers to collect young larvae from these colonies. In the 80s – 90s this strategy was followed in the Netherlands too (Elshout, 2006) although in many places in the Netherlands beekeepers would continue to work with descendants of the initial Dark bee and Italian bee hybrids. From the 1980s onwards, interest in the Buckfast bee began to grow in the Low Lands. The Buckfast bee is a purposefully cultivated hybrid of initially the Dark bee, the Italian bee, the Anatolian bee (Apis mellifera anatolica, from Turkey), the Greek bee (Apis mellifera cecropia, from southern Greece), the Sahara bee (Apis mellifera sahariensis, from the Sahara oasis) and the African mountain bee (Apis mellifera monticula, from East Africa). The Buckfast bee was established in the period from 1915 to the 1980s by Brother Adam in the English Abbey of Buckfast. To date pure subspecies have regularly been crossed in the Buckfast bee so this artificially bred bee race does not have a consistent gene pool to maintain itself. (Imkerpedia, 2015) 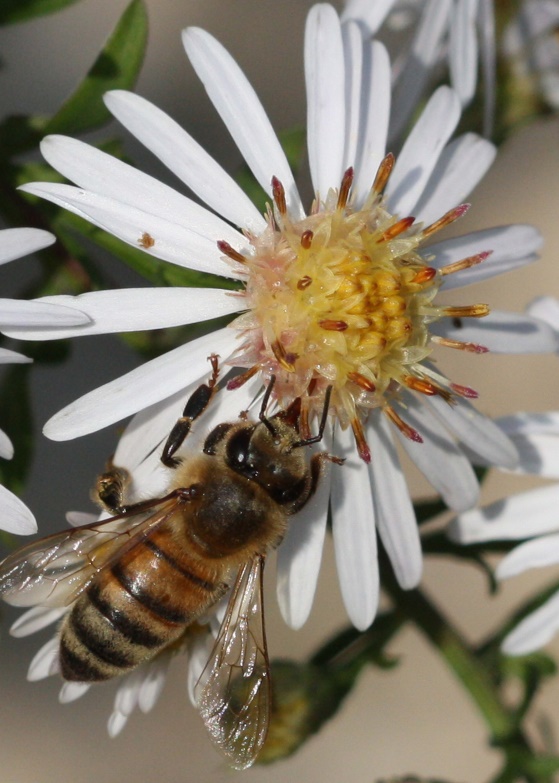 Even now, many foreign Carniolan and Buckfast queens are getting imported every year by Flemish and Dutch beekeepers (read here, for example, or watch this video from 1:10), apparently the grass still seems greener at the neighbors …

Dark bee populations are declining across Europe, but ...

By bringing Italian, Carniolan and Buckfast bees into Flanders, which also happened in Wallonia, the native Dark bee virtually disappeared during the last 80 years in Belgium and the Netherlands. Such mass imports also occurred elsewhere in northern Europe and did no good for the remaining Dark bee populations. (Ruottinen et al. , 2014) Even now many foreign Carniolan and Buckfast queens are imported every year by Belgian and Dutch beekeepers. Today, only a handful of locations (see map below) still have a large enough population that could avoid (severe) genetic pollution by other subspecies. The Dark bee therefore is a highly endangered insect. The only remaining refuge in Belgium is Chimay and in the Netherlands it is Texel, but the Dark bee is under pressure in these locations too. (Garnery et al. , 1998 & Pinto et al. , 2014) In Chimay an inland mating station has to be relied on to get pure matings whilst in Texel there is a ban on the import of queens which has been in force since the 1970s, but which has not always been strictly complied with. The problem is compounded by the rearing of Carniolan drones on the neighbouring Wadden island of Vlieland. So there is still much work to be done to prevent our Dark bee from becoming extinct. Fortunately, in recent years there has been growing interest among Northern European beekeepers for their native honeybee and increasing numbers of beekeepers are committed to preserving this invaluable ecological heritage despite it being a tough challenge (see Conservation). 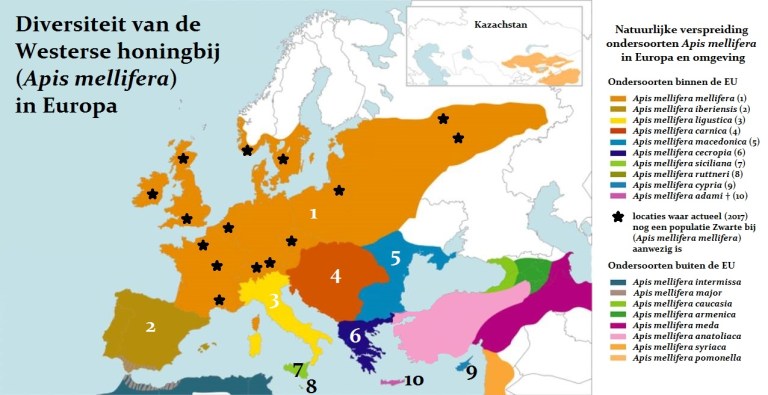 SPEELZIEK, J.J. 2004. Workbook Keeping Bees. (5th edition). Wageningen, the Netherlands: Association for the Promotion of Beekeeping in the Netherlands