Dark bees exhibit some very specific characteristics which make them clearly distinct from other honey bees such as Carniolan and Buckfast bees. These characteristics are discussed below.

Please make notice these characteristics do not include behavioural traits such as gentleness, calmness, swarm tendency, … because they are defined by the breeding efforts of our bee breeding group (see Conservation through utilization).

The broodnest of a Dark bee colony is structured quite compactly with wealthy food stores of pollen and honey around it. This way they always have essential nutrition in the immediate vicinity of the brood. 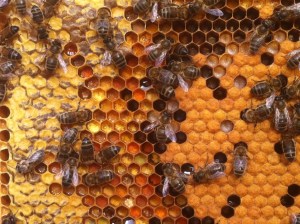 The Dark bee uses a lot of propolis, making the first check in spring somewhat difficult, but at the same time it has 2 major advantages Firstly, propolis is the honey bee’s antibiotic and secondly, in addition to honey, pollen, beeswax and royal jelly, it is a very interesting bee product. The antibiotic features of propolis are an important argument for DarkBee.org to not breed for a smaller propolization tendency, unlike what happened within Carniolan and Buckfast breeding. 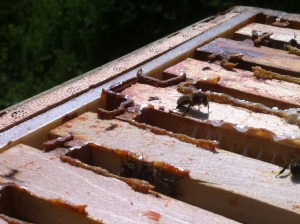 Among all methods to keep bees, there is the Renson method which is quite popular with Carniolan and Buckfast beekeepers in the low Lands. This method consists of locking up the queen from the end of April till the end of June so that she only has 30,000 cells available. This way there is less brood to take care off, meaning worker bees live longer whilst being a forager. However, the Dark bee naturally maintains a smaller broodnest leading to a higher life expectancy for the workers, so would Renson have copied his method from our Dark bees?

Because of the rather slow spring development of Dark bee colonies, possible swarm tendency also pops up later in the season, like end of May (exceptions remain possible of course). For many beekeepers, this is the ideal moment in time to make a split. 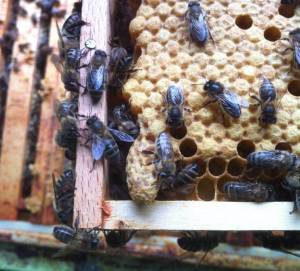 The Dark bee is known for having a very strong drive to collect pollen. Interestingly, during her foraging flights she visits more native flower species than Carniolan and Buckfast bees, a consequence of natural evolution. At the same time, Carniolan bees will visit the largest number of locally indigenous flower species in the Balkans. 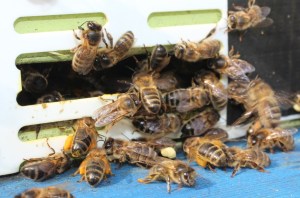 The Dark bee is a tough one when it comes to flying behaviour. Whilst Carniolan and Buckfast bees only start foraging well from 12 °C onwards, the Dark bees start at 7 to 8 °C. Furthermore, they also continue in windy and slightly rainy weather conditions. This flying behaviour makes her exceptionally suitable for the pollination of early flowering crops such as cherry and apple, because it is not uncommon for the blossom period of these crops to be disturbed by erratic weather. 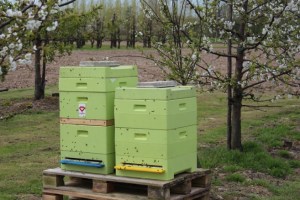 More than Carniolan and Buckfast bees do, the Dark bee tends to defend the flight entrance very well. As soon as it is August – September, wasps (or robbing honey bees) try to sneak in colonies to steal the honey. Only rarely an intruder will get into a Dark bee colony, because the guard bees are nearly constantly watching. Even a hornet will be chased off by Dark bees.

Dark bee colonies slow down their brood amount relatively early in summer, from mid-September onwards there is often not much brood left in the broodbox. The advantage of this characteristic is that the workers have to spend less and less time taking care of brood and can go foraging instead. That makes Dark bees ideal for late summer food resources such as heather, buckwheat, and sea aster. An additional advantage of this early summer brood stop is that Varroa mites can no longer reproduce, where they can still continue for a long time in Carniolan and Buckfast colonies since they stop having brood very late in the year or even keep having brood in winter. 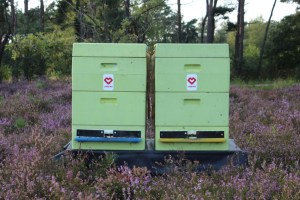 Dark bees can focus on the heather resources (Dylan Elen)

No winter too cold

The Dark bee occurs from southern France to Scandinavia, so she has already proven that she can handle a whole series of winters. In winter the colonies often form a very compact cluster, you surely do not have to worry if a Dark bee colony occupies only 3 or 4 seems in winter. 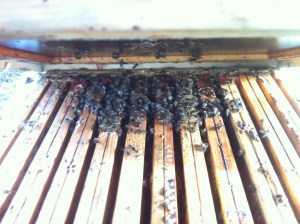